Wednesday the 15th of May marked the student’s awards in St. Anne’s. Awards were presented in a variety of categories for both academic and sporting achievements. The awards also highlight the contributions students make to school life in St. Anne’s for eq. Student Council, Mentor Programme and school spirit.

In a two hour ceremony, which was opened by piper Jordan Cleary (4th Year) leading in students and staff who had represented their clubs and county at National and International stage. The ceremony highlighted all the achievements of students who have brought back silverware in their sports but also represented the school at BT Young Scientist, School Digital Champion, County Enterprise awards and Junk Kouture. 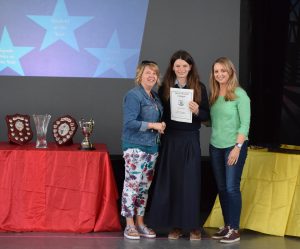 lwork and maths. An award was also presented to Óisin McKeogh in recognition of his success in the Fresh Film festival this year. Missionvale has an important place in the school’s heart. Mr. Brendan O’Brien has worked very hard with students over the years, bringing four students to South Africa to work in the township. Mr. O Brien presented Ms. Walsh with a portrait of Nelson Mandela to the school as a token of appreciation of  all the support given over the years. 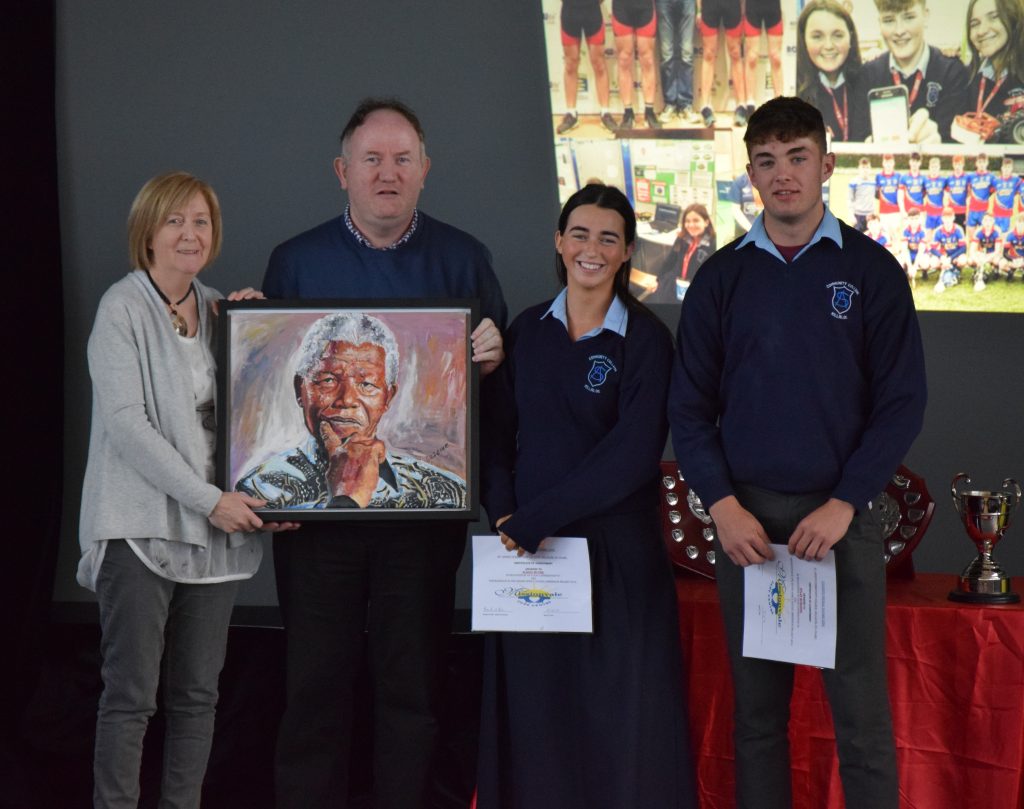 Sports are an integral part of life in St. Anne’s and a huge part of our award ceremony is the recognition of this contribution by our students to sports in the school. Awards presented to players in all sports played in the school highlighting their success and achievements throughout this academic year. Sports Star of the year was award to Rachael, Lynda and Susan Daly for their achievements in badminton and camogie. All three have represented their school, club, county and interprovincial in camogie as well as their school and club in badminton. The girls have also represented the school in other sports including rugby, athletics and soccer. The three girls are great ambassadors for sport and we wish them every success in their future sporting careers.

Team of the year was awarded to the Junior girls rugby team who finished runners up at the All Ireland schools 7’s competition. 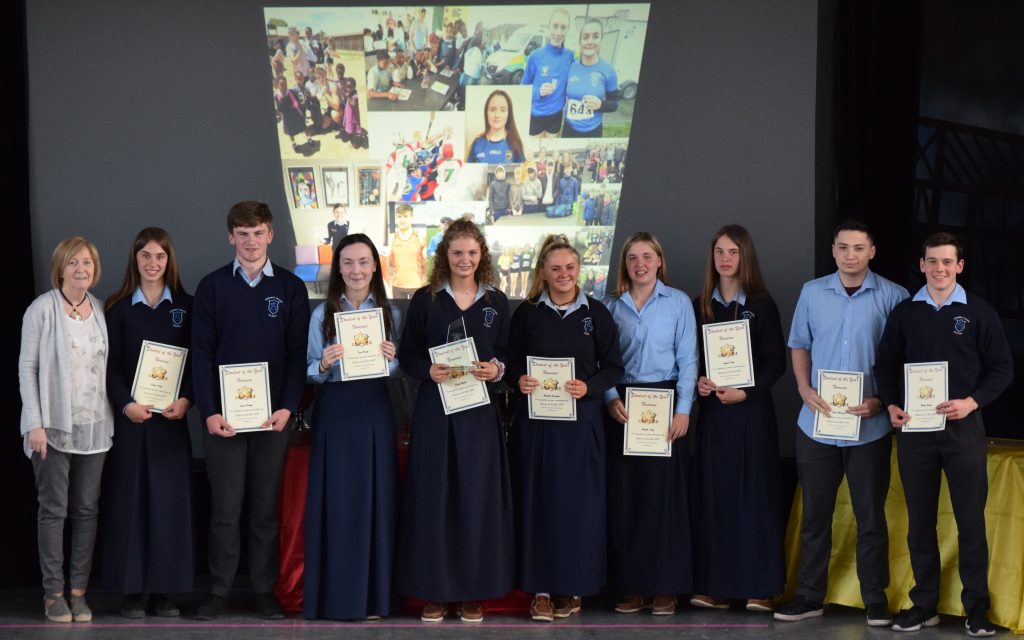 Student of the Year was presented to Emily Walsh, leaving certificate student, by Ms. Aideen Walsh. Emily, being one of 9 students to be nominated for this prestigious award, portrays all the attributes which a student of St. Anne’s represents. Her academic excellence, dedication to sport and overall demeanour in school made her a very apt recipient. We wish her the very best in her future endeavours. 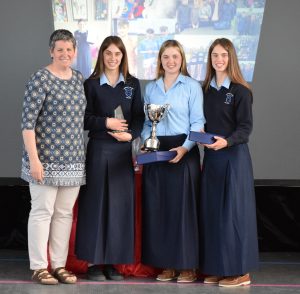 Thank you to Ms. Ailis Minogue her all her hard work in organising such a successful event.

For more pictures go to the gallery or click on the following link: Student Awards 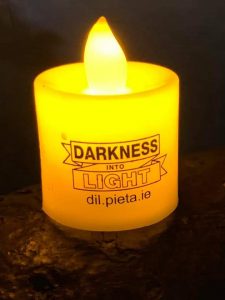 Transition Year students at St. Anne’s Community College Killaloe have contributed to and taken part in a number of very worthwhile national initiatives in recent weeks. Through the Young Social Innovators project the students decided to prioritize suicide prevention and to give practical expression to their concerns for the wellbeing of themselves and others by participating in the Cycle Against Suicide and the Pieta House Darkness Into Light walk.

While initially the focus of their work was broad and examined issues such as obesity, addiction and youth wellbeing, it was the issue of suicide that the students felt needed an appropriate but powerful expression of their concern for those struggling with their mental wellbeing. And so on Monday April 29th last a representative group of 7 students and 2 teachers led the Cycle Against Suicide into Killaloe from Nenagh where a larger group of their fellow students, gathered at the Lakeside Hotel, to welcome the cyclists across the Shannon and wished them well on their forward journey to Tulla and Castletroy. This was a fitting follow up to the attendance by 15 students at the recent Cycle Against Suicide Conference at the 3 Arena in Dublin and the school’s designation as an Ambassador School in 2018 for the Cycle Against Suicide event.

Throughout recent weeks the students discussed the role of a caring school and decided to give further expression to their desire to do their bit for suicide prevention and so a sizeable group of them decided to become involved with the local Darkness Into Light event. In co-operation with the local DIL committee and the Killaloe Ballina Family Resource Centre, the students helped on the morning of May 11th, with setting up the lighting of the route and helping with the stewarding and tidy up afterwards. However, it is through their participation in the walk itself that they showed solidarity to the school and local communities as well as contributing to the work of Pieta House. The DIL event has taken place in the twin Shannonside towns of Killaloe and Ballina for the last 5 years and has become an annual event for the students of St. Anne’s Community College.

Cycling, walking, talking and remembering loved ones are practical and effective ways of creating awareness of suicide prevention and for the students of St. Anne’s a meaningful way to spread the message that it is okay not to feel okay and that it is okay to talk about it and that the power of hope is crucial to building resilience and strength. 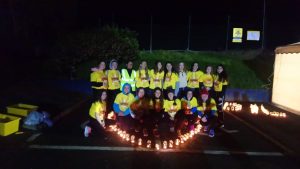 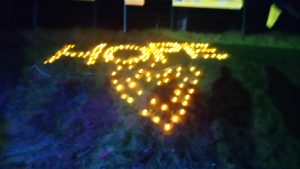 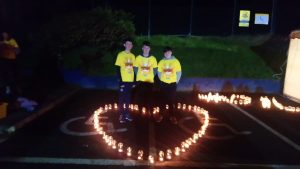 Well done to our staff and our students who took part in Darkness Into Light Killaloe Ballina in the early hours this morning to raise much needed funds for Pieta House, Preventing Suicide and Self Harm, a service we are very grateful for, for our students.
This amazing annual event took off at 4.15am spreading the message of hope, support and community. Even through the darkest of times we must have hope, that little chink of light in the dark.
Imagine, we have had two major nationwide events within a couple of weeks of each other, highlighting the very same message.
To our students, please remember, we are all in this life together, let’s help to build each other up, not tear each other down, and please remind all the adults in your life to do the same, because sometimes we forget too 😉 😍
#DIL2019 #ittakesavillage #bethechange #thatshowthelightgetsin#itsokaynottobeokay #askforhelp 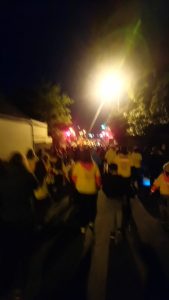