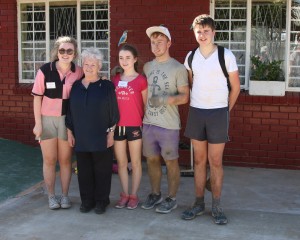 In January 2013 two students from St. Anne’s Community College and their teacher Brendan O’ Brien travelled to the township of Missionvale in the city of Port Elizabeth in the Eastern Cape in South Africa. Such was the impact that visit had on the school community and locality that in January 2015 four students and Mr. O’ Brien again travelled to Missionvale.

Emma Collins, Ben King, Emer Mooney and Michael O’ Shea currently Leaving Cert. students in St. Anne’s followed in the footsteps of Anthony Kennedy and Matthew Pooley when they joined with a group of tradesmen, medical professionals and care-workers in a party of 43 plus people who went to the township in January 2015. As part of this group, who travelled under the auspices of the Missionvale Ireland Trust, the students experienced life in the township as well as assisting with a variety of development projects in the mission which was founded by Sr. Ethel Normoyle some 27 years ago.

In January 2017, it is hoped to bring another 4 students to Missionvale. Already, a major fundraising drive for the project has begun with the now almost annual Christmas Jumpers Day for Missionvale having been held in the school on Friday December 18th