This Munster final was played on Sat on very wet and difficult underfoot conditions. The Cork outfit were a physical side and conditions probably suited them better, as Killaloe were a much lighter team. However this didn’t faze the very determined East Clare School and they gave it their all from the throw-in. The midfield pairing of Holly McGee and Lynda Daly worked well together, feeding lots of ball to the forwards, resulting in two green flags being rose by corner forwards Áine Ryan and Hazel McMahon. Corks first score was a point from a free, and this was duly followed by 3 more converted frees from St.Annes. During this time, great defending came from Susan Daly and Alison McGee, while up front Ellen Lane, Aoife Power and Maeve Óg O’Leary produced some fine camogie despite the difficult conditions. Cork had a better second period of the first half, when they scored 1-3 to St. Anne’s 0-1, leaving the halftime score at 2-4 to 1-4 to St. Anne’s.
The second half saw the teams score a point each, before cork raised their second green flag to level the game. However St. Anne’s never let up, and good work from Anna Spaight and Moya Marsh McMahon, led to the cork girls conceding a free and a 45, which were scored by Aoife power to put them 2 points ahead. The cork girls again clawed back a point for it to be cancelled out by a final point from Maeve Óg O’Leary to seal a well-deserved 2 point win for St. Annes.

Thank you to Mags Power for the Report. 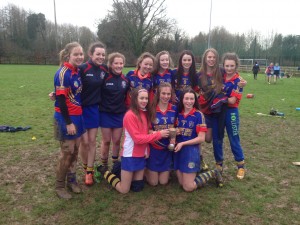 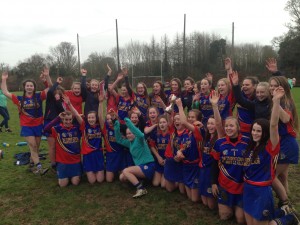